The company meets the problems of on aging society, by developing access to care and enabling remote provision of medical care and services.

The device by SiDLY is the first medically certified telemedicine band in Europe (class 2a according to the European Medical Devices Directive 93/42/EEC, awarded by the leading certification body TUV Rheinland). Using the proprietary algorithms and neural networks, the company created the entire system based on the wearable device and remote monitoring of vital signs. The Sidly Care system consists of: a telemedicine platform, a medical device in the form of a wristband, iOS and Android applications. All data from the device is regularly sent to the application and platform where it is analyzed. Thanks to the SiDLY solution, the family or the guardian of the user can perform daily duties: work or study at a different location than the user and still tend to a patient at the same time. If there is an emergency situation (eg falling, exceeding the declared heart rate values, leaving the declared zone), the guardian will be informed about it. The guardian also has constant access to all current and historical results sent from the wristband.

The company has clients from 14 European countries and pilot implementations in the US and Japan. SiDLY’s clients include medical units and care institutions, senior homes, local governments as well as companies operating in the area of ​​increased risk for employees. SiDLY technology provides a great sense of security and freedom for users, but also affects the quality and costs of the medical institutions. It allows for effective time management of guardians, as well as increases the sense of security of users and reduces the response time to emergency situations. In companies where work is carried out in conditions of increased risk, work safety is improved by faster response to fainting and falls of employees, improvement of risk management, better adjustment of tasks to the physical condition of employees, which, in result, increases the attractiveness of the workplace. 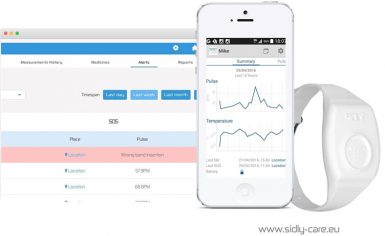 Since 2014, the startup has achieved many international successes and received numerous awards in the medical, technological and business sectors. SiDLY Care technology was awarded the title of “Most Innovative Telemedicine Product”, “Expert Laurel” or “Grand Prix Medical”. Startup received the title of one of the 10 best startups in the Entrepreneurial Poland ecosystem, the Microentrepreneur of the Year distinction, and the Best Female startup in the Polish-Israeli competition. The founder has been awarded, among others, the title “30 under 30” in Europe, by the American edition of Forbes Magazine. 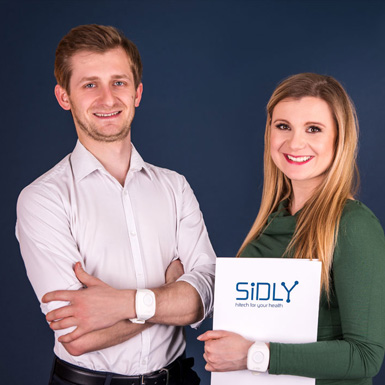 However, according to Edyta Kocyk – founder and CEO of the company, the most important reward is the positive feedback and satisfaction of SiDLY’s customers. The quality of SiDLY solutions is also demonstrated by the implemented quality management system for manufacturers of medical devices by Polish Norm standards: EN ISO 13485:2012.
As part of the R&D project implemented with the INNOventure investment, the company will carry out research and development of a new version of the system. The obtained funding will allow, among others, to create advanced neural networks, medical algorithms and care functionalities, which will then be implemented in the new version of the device. The telemedicine system will also be significantly expanded to include functionalities that increase the quality and usability of telecare services. The whole solution will be tested in accordance with the European Medical Devices Directive 93/42/EEC.