The process of getting investors for a startup is a multi-stage one, and information about it is often communicated in non-obvious industry jargon. So we decided to briefly sum up how this process works and what role INNOventure plays in it.

The chart below represents the risk of a project and its need for capital changing over time. The character of high risk investments is explained by this chart. The beginning of a startup is an idea. At the idea stage, both technical feasibility and economic efficiency are unknown, so the likelihood of project failure is maximal. On the other hand, carrying out the next step in the project, i.e. preliminary development works, does not require huge financing. In time, when further actions in the development of the project are taken, the uncertainty decreases, and with it the investment risk, and at the same time both the value of the startup and its financial needs increase. Of course, the risk never goes down to zero – even large companies with great traditions fail sometimes – but it is definitely heavily reduced. 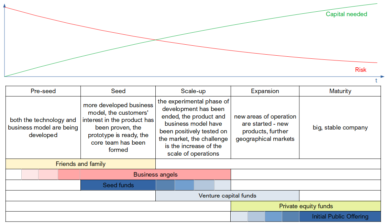 Once we realize that, for example, buying for USD 1M a company that is worth USD 1M is mathematically the same as buying for USD 100K a company that is 10% certain to be worth USD 1M, we can easily guess the investment profile of different types of investors listed in the table, in terms of investment size and risk aversion. (Of course, the above is a simplification, but it explains the general principle well enough).

Investment as a series

The basic observations above explain the sequences of actions that appear in the process of obtaining startup financing on various scales – a single transaction, subsequent transactions with a given investor, as well as finding multiple investors.

The structure of a single transaction usually reflects this basic principle that the further the stage of development, the more funds are needed, but the lower the risk. Therefore, often the payment of funds takes place as a sequence of tranches. The investment agreement specifies the amounts to be transferred to the startup, the rules for the transfer of shares by the startup in exchange for the funds, and finally the conditions that the startup must meet to obtain these subsequent tranches.

With the development of the company and the increase in the demand for capital, subsequent investment rounds follow – the startup acquires more investors and concludes contracts with them. This sequence of agreements also illustrates the above mentioned rule –  the further the stage of development, the more funds are needed, but the lower the risk. During these rounds, the startup is dealing with different types of potential investors. Family and friends usually have limited resources, but they believe in the entrepreneur from the very beginning and are willing to invest as early as needed. Business angels are investors who invest their private funds on their own behalf, both financially supporting the startup and personally engaging in its activities. Seed funds invest amounts of several hundred thousand up to about one million PLN, they are often ready to do so even when the startup is not generating revenue yet. Rather, the investments are based on an analysis of the idea, market, technology solution, business strategy and team experience. Venture capital funds are able to invest several million zlotys, but they are also more cautious – they are not likely to invest funds when the project is still at a stage of more or less random wandering in search of a working, scalable business model. This type of investor expects that the startup has a verified business model, and the problem is no longer “what to do” or “how to do it”, but how to obtain financial “fuel” to power the already well functioning business “engine”. Capital from VC funds is also used to finance growth: introducing new products or entering new geographical markets. At this stage, there is also the possibility of attracting private equity funds who, seeing efficient and fast-growing enterprise, bravely entering new markets and maybe even acquiring competitors, are willing to invest amounts exceeding PLN 10 million.

When a startup is looking for investors in subsequent rounds, nothing prevents it from turning to its previous investors. If the cooperation so far has been successful, they can decide to reinvest in the given startup, i.e. carry follow-up investment. A round in which more than one investor appears, i.e. a co-investment, is also possible.

It is assumed that as time passes, and startup reaches subsequent development phases, its value increases. The reality is more complex. First of all, the development of any aspect of the startup obviously does not result directly from the passage of time, but from the activities undertaken by the team. Secondly, sometimes despite taking these actions, the startup gets stuck, encounters difficulties and gets stuck. Sometimes the project changes its direction of development, abandoning a dead end and turning to a modified version of the product or a different business model. Therefore, as mentioned above, the drawing representing a uniform decrease in risk and an equally uniform increase in value is only a simplification. There are actually three types of investment rounds:

In the above described sequence of people and institutions buying shares in a startup with the intention of reselling them at a much higher price, a completely different type of investor may appear – one who buys shares in the company with the intention of holding them in the long run. A strategic investor is an enterprise interested in buying a startup due to the fact that it has resources (technology, customer group, geographic market) that are attractive for the investor and synergistically complete his business. Well-known examples are Facebook acquiring “missing elements” of their business, in the form of Instagram and WhatsApp.

How does INNOventure fit into the investment mechanism described above? Well, we are a seed fund, which means that we invest in startups very early – already at the proof-of-principle stage (i.e. early verification of the idea, including industrial and applied research, initial assessment of the project from the commercial viewpoint, and thus assessment of the business potential, analysis of competitive solutions market, defining a research plan) or proof-of-concept (i.e. a bit more advanced phase of project verification, including research aimed at patenting a technological solution). The construction of our investment agreements usually involves tranches. We invest both individually and take part in co-investments with other funds or business angels.